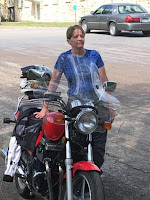 I began podcasting over at the BiCast a few short years ago, at the invitation of Lynnette McFadzen. She taught me everything I know. Working over there, I've met a ton of wonderful bi+ people that have definitely made me feel less alone in the world.

Currently, I live in Lawrence, KS. My home is a happy one filled with children, pets, and a loving spouse. When it comes to relaxing, I enjoy riding my motorcycle, chainsawing stuff, fiber arts, and binge-watching television shows with the kids. 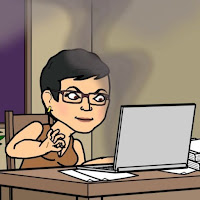 Hey, I’m Amy, they/them please and thank you. I’m a co-host as well as an author, freelance editor, and reading nerd. I have a tendency to fan-crush all over my favorite authors, and I love to talk about books and writing. I have several novels published as A.M. Leibowitz, primarily with bisexual characters of various genders and relationships.
I didn’t come out as bi and gender fluid until I was in my late 30s, right before publishing my first book. I’d known for years that I was multi-gender attracted, but it was hard to admit it even to myself. Being out publicly has opened up a whole new world for me. I’ve built new relationships and rekindled old ones now that I can be my authentic self. Through writing, I’ve been able to work through a lot of the complexities of my identity.

I like to joke that I’m “half of everything.” Raised in an interfaith family with strong ethnic ties on both sides, I have always lived in the spaces between one culture and another. It makes perfect sense, then, that my sexuality and gender would reside in those spaces too. As a person living with multiple invisible disabilities, I also understand the importance of really being understood and believed about who we are and what we need.

Besides all that, I’m a spouse and a parent of the two most wonderful kids (I may be a bit biased). In what little spare time I have leftover, I’m a violinist with a local community orchestra. Music is as much a core part of my identity as anything else.

If you want to talk to me or send me awesome bi books to read, you can find me any of these places: 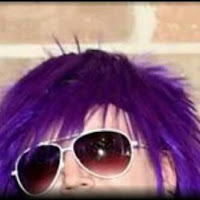 My name is Mick Collins. I’m a co-host and author. After spending a childhood fending off and finding excuses for odd affections and urges, I realized at nineteen that I was bisexual. The realization was a crystal clear thought and my reaction wasn’t spectacular. In fact I remember thinking, "Oh. Well, that makes sense." then went back to studying. Living in Southern Idaho for thirty years, one gets good at existing at the fringes without exactly explaining why you are there in the first place. But then I moved to Austin where the fringe is less fringier. I have always been open about who I am but selective in what situations I choose to reveal it, because Momma didn’t raise no fool.

I am an author who has published a number of short stories (and counting) as well as my novels, Night Shall Overtake and Pale Winter Sun.

Community is not something I have a strong history of reaching out to. The saying goes that no man is an island. My response to that was always, “Watch me as I prove you wrong.” So I spent lots of time just avoiding the hell out of things. But I can’t do it anymore. There is too much at stake to sit back. I have battled depression and idiots and have come to the hard fought conclusion that things are darkest only because there is so much light to reach for.